A league of their own – Three Ireland's EStars
Skip to content 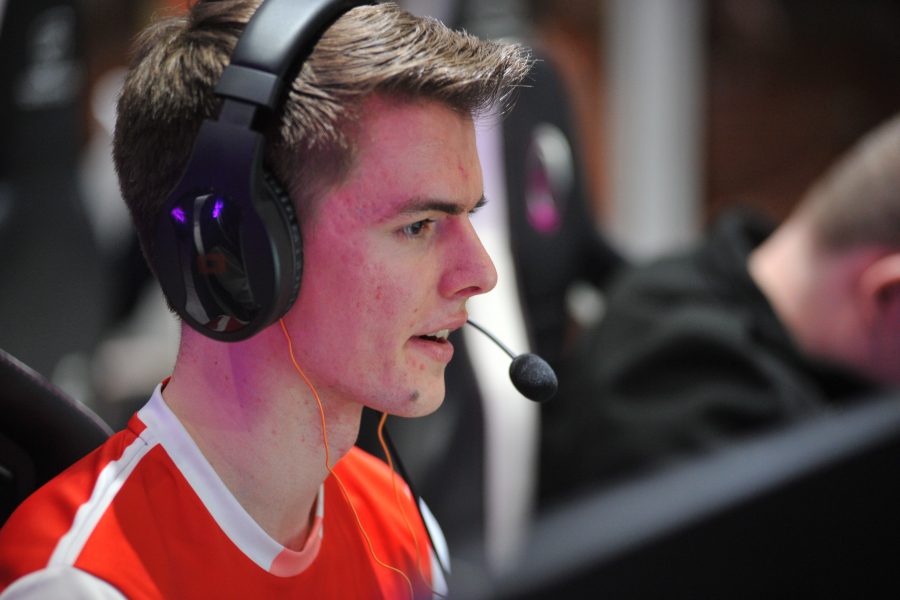 With the league hanging in the balance and only Shamrock Rovers having secured their playoff position on Monday night’s Super Week encounter, five teams were in contention for the remaining three spaces. Big Betty had enjoyed the respite of a two-day stay at DCU, but the grand dame was primed for a night that was set to be a scorcher. With just one game remaining for the teams to make the playoffs and ultimately earn their place taking the stage at the final at the 3Arena on Sunday, May 13th.

There was a nervous energy to the final night of the biggest road trip Irish esports has ever seen. The premise is simple. Ten teams, representing nine League of Ireland football clubs and main sponsors Three and composed of the country’s finest gaming talent, battling to earn their place at the 3Arena. The victors will walk away with €20,000 and a trip to Las Vegas.  Every win is crucial.  Every loss is devastating. This is not a game. This is so much more.

The first night of Super Week had reflected the pressure and excitement of the competition, but had left a wide span of the table gripping to the hope of a playoff spot. Scoring yet another successive win since their sole loss in Week One, Shamrock Rovers walked away from the penultimate night as the only team secure at the top of the table for the semi-finals. Despite falling to Team Three on Monday, Bray had a mountain to climb, with just four wins, with Dundalk and St Patrick’s having overtaken them in the table. To say that the stakes of the final league night were high is an understatement. Think we all need a lie down after such an epic night.

The ever-charming Connor Phillips was back on presenting and banter duties, to congratulate the victors and the console the defeated. While resident casters David Whyms and Nikita Buffee kept the Twitch audience and the assembled crowd in the Nubar updated, while the guests enjoyed samples from soft drinks partner Lucozade, food sponsor Four Star Pizza and support from main sponsor Three and merchandise partner Peak. The final week.  The final chance to make the playoffs. What a league we have had.

A tale of two cities with very different fortunes across the Three Ireland EStars league. Cork started with a bang, the only team to have taken down Shamrock Rovers, but struggled to retain their winning ways. Derry on the other hand faced their final opportunity to chalk up a win in the tournament. Cork were not feeling in a generous mood and dismantled Derry with ease. A fantastic finale for Cork and disappointment from the always gracious northerners. Result Derry 0 Cork 1

It was crunch time for both Dundalk and Sligo Rovers. Although, Sligo had the edge on the table, a Dundalk win would set them level and, with-head-to-head in play, the potential their advancement hopes could be dashed remained. In what was the absolute thriller of the night, Dundalk maintained an edge throughout, until Sligo Rovers stormed through with a fantastic finish. The result placed Sligo firmly in second after their fellow Rovers and scapped Dundalk’s dreams of a playoff spot. Result: Sligo Rovers 1 Dundalk 0

Already through to the playoffs and sitting solo in first place, Shamrock Rovers faced a Bohemians with no chance of advancement from the league. As expected, Rovers delivered another assault which the Bohemians roster couldn’t contain. Shamrock Rovers secured an impressive eight victory in a row and an undeniable first place league spot. Result: Shamrock Rovers 1 Bohemians 0.

The final two games would decide the final four. Still in contention were Three and Pats. While Three had an uneven clashed in the mid-league period, their early dominance returned and the team display dismantled the Pats dreams of playoffs, securing their own semi-final position in the process. Result: Team Three 1 St. Patrick’s 0

A loss in the previous week had seriously dented Bray’s ambitions, placing them below both Dundalk and Pats in the standings. A glimmer of hope remained. A win over Limerick and if the other results went their way, they would advance on the rules of head-to-head, having beaten both Dundalk and Pats during their campaign. With all hope not lost, Bray weren’t taking any chances and took down Limerick securing, not only their win, but the elusive fourth place. Result: Bray Wanderers 1 Limerick 0.

Mags Byrne of Three Ireland’s EStars said: “What an amazing league we’ve had and this one kept everyone guessing down to the final matches. The playoffs will no doubt bring further twists and turns in advance of the Final in the 3Arena on May 13th. In a league that has been filled with shocks, we can’t wait to see our finalists take the stage at the 3Arena.”

Karl Donnelly of Three, Ireland added that the telecommunications company were delighted to pledge the sponsorship of the Three EStars league activity this week at both events at DCU.

“We were delighted to bring our sponsorship of the Three EStars league activity this week back at DCU,’ he said. “This partnership offers a really unique gaming experience for the first time in Ireland. At Three, we are committed to providing the latest technology innovations such as providing the first smartphone from gaming giant Razer handset, exclusively on the Three network, enhancing the lives of our customers. In addition, our All You Can Eat Data offering, enables our customers to truly make it count.”

Keep updated on our semi-finals online and all the way to the 3Arena in May, check out ireland.estars.pro