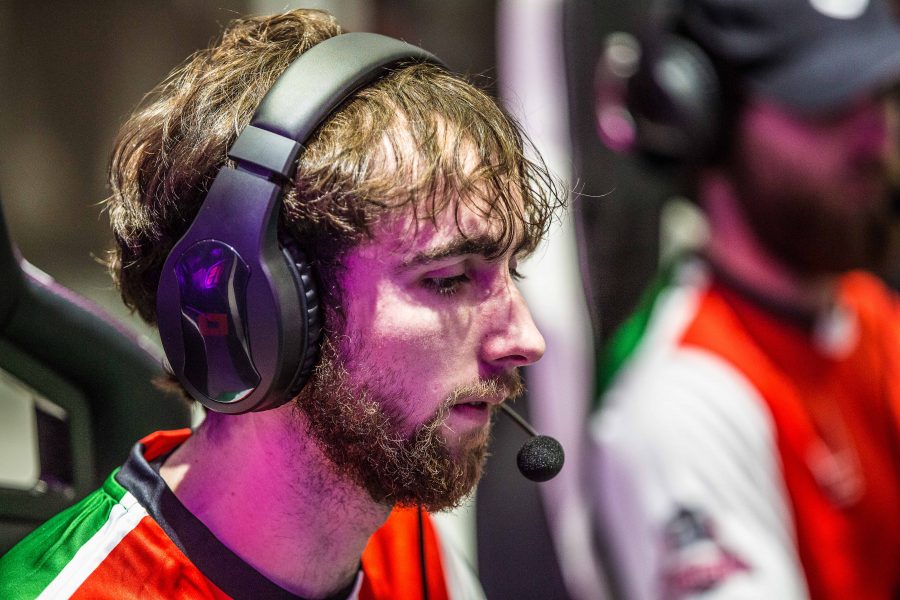 Week Six, Tallaght Stadium, Dublin.  Three Ireland’s EStars invaded the home of Shamrock Rovers for the league’s biggest night yet on Wednesday, April 18th. Rubbing shoulders with some of the brightest talent of Irish league football, Premiership stars who jetted over from the UK for the occasion, and Irish goal-scoring legend Niall Quinn, the Three Ireland EStars proved that when it comes to the big clashes, they too can rise to the occasion.

With Her Highness Big Betty docked in the shadow of the stadium, the competitors stepped on to the latest leg in the biggest road trip Irish esports has ever seen. Once again, ten teams, representing nine League of Ireland football clubs and main sponsors Three and composed of the country’s finest gaming talent, took to the belly of Betty to face the next hurdle on the road to the 3Arena.  At stake, the right to contest the Grand Finals on May 13th, where the victors will walk away with €20,000 and a trip to Las Vegas.  Every win is crucial.  Every loss is devastating. This is not a game. This is so much more.

Week five at DCU had been a scorcher, pitting best friends against each other, bringing winning streaks to a dramatic plummet and ensuring the final league standings are a mystery to defy the most seasoned of analysts. Week six, promised another quintet of tantalising matches and, with upsets and surprise victories, the league table got another shakeup. Who will rise to the challenge of the finals in the 3Arena next month? It’s still all to play for.

After a brilliant opening by percussion troupe, The Hit Machine Drummers, the Tallaght crowd were treated by surprise supporters, Irish league football stars, Premier League stars Tim Krul, Davy Pröpper and Gaëtan Bong, and Irish international legend Niall Quinn.  Presenters Conor Phillips and Holly Hamilton grilled the contenders post and pre-match, about whose gameplay was inspired and which teams’ displays left a lot to be desired. The teams were focused as they took on the biggest hurdles of the league.  With an eye firmly on goal, five teams determined to invoke that beautiful word victory emblazoned on screen.

With the home team being given the opening slot, Shamrock Rovers had been surfing a wave of consecutive victories and were certainly comfortable as they faced off against a plucky Limerick side. Limerick had their first taste of victory in week five, but even Katazen upping his army fatigues with headwear was not enough to secure the battle. Shamrock Rovers took an easy point to remain top of the tree. Shamrock Rovers 1 Limerick 0

At this stage of the competition, both Cork and Bohemians were aware that a defeat might rule out their chances at a spot in the final four. While Bohemians were keen to shake off the double loss at home the previous week, Cork soared ahead, with sub Ivor giving a serious boost to the Rebel Army’s fortunes. A very crucial point for Cork and a devastating loss for Bohs. Cork 1 Bohemians 0.

Week five had been a week to forget for Team Three. With four consecutive wins, the team had enjoyed the most glorious of opening runs to the competition. Having been unseated by Shamrock Rovers in the previous week, Team Three were keen to return to winning ways, but with Dundalk having regained momentum with a decisive victory over Bohemians in week five, they knew the encounter was crucial for retaining contention. In dramatic fashion, Dundalk isolated Three’s playmaker and never allowed the sponsor team to regain their edge. Hard questions for Three and Dundalk are certainly back in the game. Dundalk 1 Team Three 0.

St. Pat’s took a double victory in DCU last week and found themselves sharing the top slot with Three and Shamrock Rovers. Sligo also enjoyed the scent of blood last week having felled rivals Bray. Both teams entered Betty with confidence, but Sligo executed a brilliant gameplay to take the win. The early favourites are returning their stamp upon the contest in consistent fashion with three wins in a row. Sligo 1 St. Pat’s 0.

Having suffered a loss at the hands of Sligo the previous week, Bray had entered Betty determined to return to winning ways against underdogs Derry. Despite a valiant defence, Derry were felled by a Bray side on form and on fire. Bray keep their final four dreams stoked, while Derry suffered another heartbreak. Bray 1 Derry 0

Mags Byrne of Three Ireland’s EStars said: “We have had a truly brilliant night this week at Shamrock Rovers and it was great to see all the footballing talent get behind our players and our vision for this competition. The race to the 3Arena on May 13th remains too close to call, and we are determined to make the Three Ireland’s EStars Final a fitting match to the action we’ve seen throughout this league.”

Karl Donnelly of Three, Ireland added that the telecommunications company were delighted to pledge the sponsorship of the Three EStars league activity this week in Tallaght Stadium.

“We were delighted to bring our sponsorship of the Three EStars league activity this week to Tallaght Stadium,’ he said. “This partnership offers a really unique gaming experience for the first time in Ireland. At Three, we are committed to providing the latest technology innovations such as providing the first smartphone from gaming giant Razer handset, exclusively on the Three network, enhancing the lives of our customers. In addition, our All You Can Eat Data offering, enables our customers to truly make it count.”

To follow the progress of the teams in the next bout this coming Wednesday in Limerick and all the way to the 3Arena in May, check out ireland.estars.pro