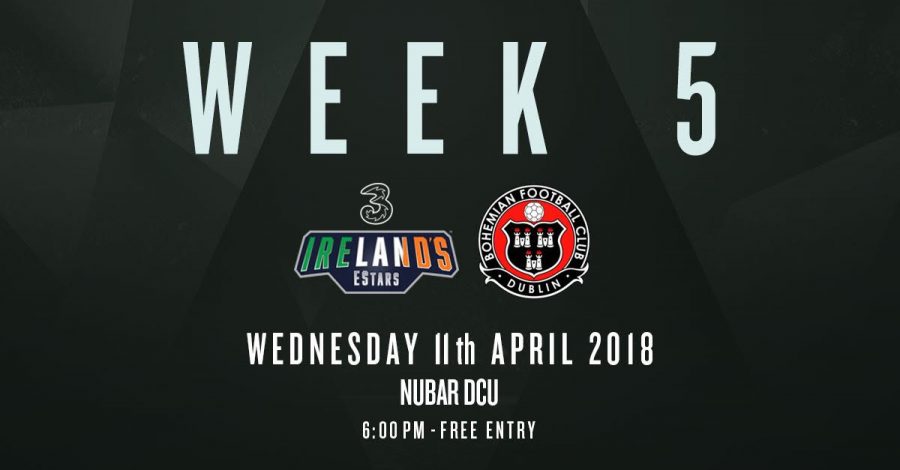 As Three Ireland’s EStars enters into the business end of the competition, all teams will be eager not to get schooled in the fifth leg of Ireland’s biggest esports roadtrip, this Wednesday, April 11th at Dublin City University, from 6pm.

With all the teams set to matriculate to the second half of the competition, Three Ireland’s EStars will descend upon the Glasnevin college for the first of the Dublin teams’ home encounters. With a viewing area in the NuBar, spectators will be able to follow the action while the bouts take place on board her ladyship Big Betty, set to be docked in the shadow of the Helix.

Presented by radio stars, Connor Phillips and Holly Hamilton, Three Ireland’s EStars League at DCU provides a chance to see the world’s fastest growing spectator sport where some of the esports stars of the future are currently studying. Expert gaming shoutcasters will explain and analyse the unfolding action, and soft drinks partner Lucozade, main sponsor Three, new retail partner Peak and food partner, Four Star Pizza, will be on site to add to the buzz and fuel the competition. Dublin radio station and media partner SPIN1038 with the legendary ‘Spinnies’ will also be at DCU to coordinate the many giveaways, and add a soundtrack to the latest Wednesday night EStars’ fight night.

Though Wednesday’s event is the official home event for the Bohemian’s EStars, it feels very much a homecoming for the genesis of gaming in Ireland, a community which has thrived through the hard work of students, as both players and visionaries of the scene. DCU has long felt like a spiritual home to fans of League of Legends. Chair of the LoL DCU society Luke Evans, who also acts as Support on the St Pat’s EStars team, said the society was delighted to see Big Betty and the competition drive into the university.

“We are delighted to be involved in bringing Three Ireland EStars to DCU,” he said. “We were the first exclusive League of Legends society in Ireland and now DCU will be the first college to host such a huge esports event in the country.”

“We recognise the amazing grassroots work that has been done by the gaming community in Ireland to grow esports, particularly in universities and colleges, and, with many of our players currently students, having a league event in DCU felt like a perfect fit,” she said. “We are looking forward to hosting the DCU student population and all the Dublin fans as they enjoy this crucial leg in the Three Ireland’s EStars league.”

Karl Donnelly of Three Ireland added: “We are delighted to bring our sponsorship of the Three EStars league activity this week to DCU. This is the fifth round of an exciting new league which will culminate in a grand final at the 3Arena on May 13th. This partnership offers a really unique gaming experience for the first time in Ireland. At Three, we are committed to providing the latest technology innovations such as providing the first smartphone from gaming giant Razer handset, exclusively on the Three network, enhancing the lives of our customers. In addition, our All You Can Eat Data offering, enables our customers to truly make it count.”

Three Ireland EStars will be in Dublin City University, Glasnevin, Dublin 9 this Wednesday from 6pm, with lots of special giveaways to celebrate the visit.