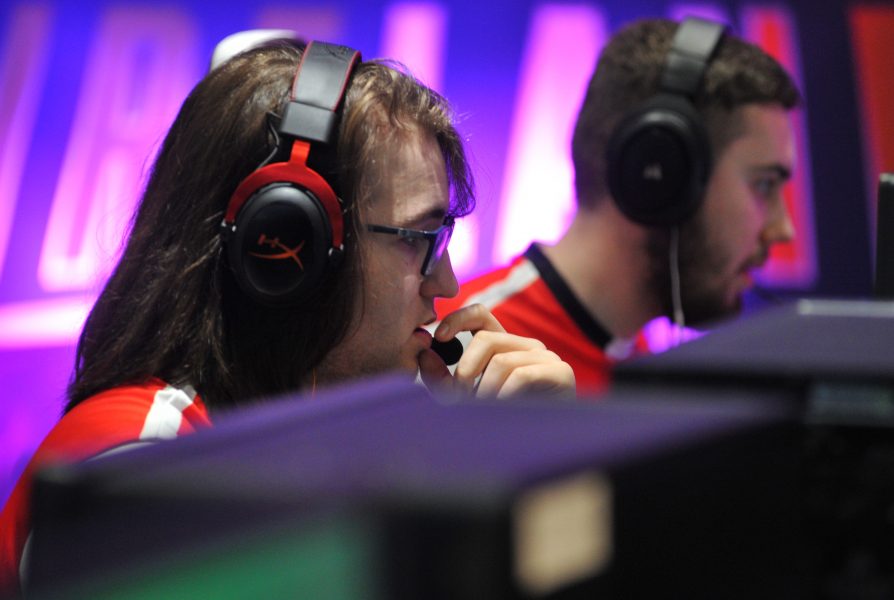 Week Eight, Dublin City University, Dublin. For the penultimate league night, Three Ireland’s EStars returned to the Glasnevin campus for the St. Patrick’s home night and, though the campus may be shrouded in a cloud of exam fever, with the arrival of Ireland’s biggest roadtrip, the sun came out, the battle lines were drawn and teams cemented their bid for the final at the 3Arena.

With just two league nights remaining, the margin for error is fractional, with the results across the board layering on the pressure on the top tier teams. The results of all the games promising to take the semi-final race down to the wire.

Big Betty was back on familiar ground in the shadow of the Helix and the players braved themselves for the latest hurdle of the biggest road trip Irish esports has ever seen. The premise is simple. Ten teams, representing nine League of Ireland football clubs and main sponsors Three and composed of the country’s finest gaming talent, battling to earn their place at the 3Arena. The victors will walk away with €20,000 and a trip to Las Vegas.  Every win is crucial.  Every loss is devastating. This is not a game. This is so much more.

While last week’s Limerick trip was a thriller, the Three Ireland’s EStars league table had become a battleground of contenders with viable ambitions for the finals. As if the pressure of the last week and those elusive final chances was not enough, the teams will have to contest another league night this Thursday. Week eight.  The 3Arena within touching distance. Who will make it to playoffs? It’s not certain just yet.

The effervescent Holly Hamilton was back on presenting duties, to congratulate the victors and the console the defeated. While resident casters David Whyms and Nikita Buffee kept the Twitch audience and the assembled crowd in the Nubar updated, while the guests enjoyed samples from soft drinks partner Lucozade, food sponsor Four Star Pizza and support from main sponsor Three and merchandise partner Peak. The final week.  The final opportunities to make a mark on the competition. The action on stage was electric.

With an updated roster and the inclusion of a new jungler, Bray Wanderers had an unsettled week in their run up to the crucial encounter with Team Three. Three had brushed off a couple of successive defeats to return to winning ways against Limerick at home last week, leaving both teams at level pecking for advancing towards the play-offs. Team Three gripped at the game from the opening and Bray were unable to negate the early advantage seeing the sponsor team seize the victory and set themselves comfortably in the running for a playoff slot. Bray are not yet out of contention, but a serious dose of luck will be necessary to make the playoffs. Result: Bray Wanderers 0 Team Three 1.

Comfortable at the top of the table, Shamrock Rovers faced a St. Pat’s side with their own finals’ ambitions. Nestled in a group of level sides, St Pat’s knew that victory over the league leaders would be essential to keep their playoff dreams alive. Once again, Shamrock Rovers delivered a brilliant display which, despite their best efforts, St. Pat’s were unable to turn in their favour. Shamrock Rovers will most certainly be the team to fear in the play-offs, while St Pat’s again will be relying on a victory on Thursday against Three and a lot of luck to snatch a semi final slot. Result: Shamrock Rovers 1 St Pat’s 0

Having come off the back of a string of successive defeats, Bohemians were keen to end the streak of misfortune up against a struggling Derry. Derry, who remain focused on taking an elusive first win were hoping to take advantage of Bohemian’s woes. It was not to be for Derry, who struggled under the might of the Bohs attack. Result: Bohemians 1 Derry 0

With their semi final dreams very much in play, Sligo Rovers have been playing an absolute stormer after a couple of defeats earlier in the league and, with Cork retaining a long shot at nudging in, again we were treated to a brilliant encounter. Sligo rose to the occasion in a blistering assault that Cork struggled to counter. A brilliant victory for Sligo and a disappointing, if plucky, end to Cork hopes. Sligo face a tough challenge on Thursday from a resurgent Dundalk, but will feel confident poised in joint second place for the final night. Result: Sligo Rovers 1 Cork 0

While having some bleak moments during the competition, Dundalk have proven to be very much a team on the up and, having secured the impressive feat of real playoff contention, were confident against a Limerick side who had only managed to secure a sole victory. As expected, Dundalk dominated and took the much needed point, bringing their semi final ambitions right down to their final bout against a strong Sligo side on Thursday. Result: Dundalk 1 Limerick 0.

Mags Byrne of Three Ireland’s EStars said: “The league is almost over and the penultimate night has kept us all on the edge of our seats. With just one more night to go this Thursday, with so many teams still in with a shot of the playoffs, we cannot wait to see who will be facing off at the Final in the 3Arena on May 13th. After what we’ve seen throughout this league, we know the Three Ireland EStars Final will be amazing.”

Karl Donnelly of Three, Ireland added that the telecommunications company were delighted to pledge the sponsorship of the Three EStars league activity this week back at DCU.

“We were delighted to bring our sponsorship of the Three EStars league activity this week back at DCU,’ he said. “This partnership offers a really unique gaming experience for the first time in Ireland. At Three, we are committed to providing the latest technology innovations such as providing the first smartphone from gaming giant Razer handset, exclusively on the Three network, enhancing the lives of our customers. In addition, our All You Can Eat Data offering, enables our customers to truly make it count.”

To follow the final step to the Final this Thursday once again back at DCU and all the way to the 3Arena in May, check out ireland.estars.pro