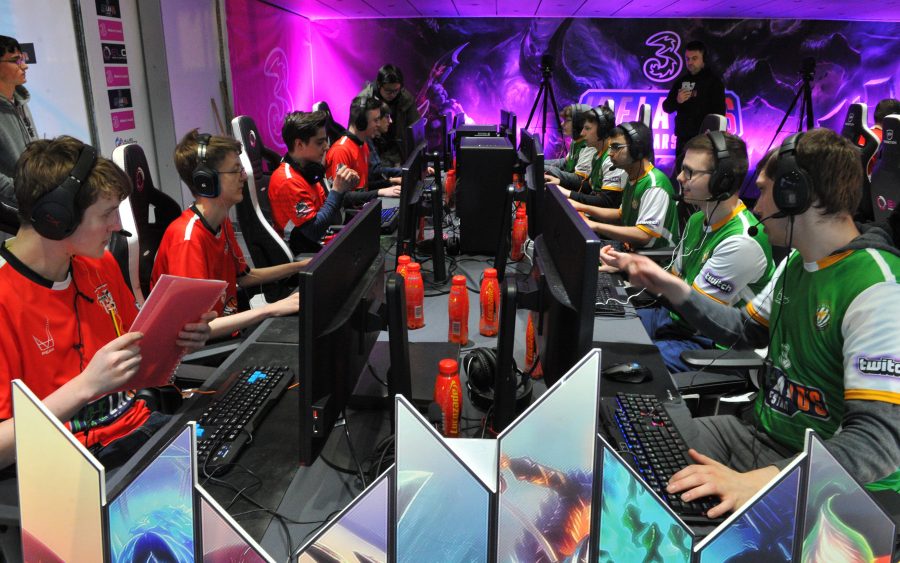 Offering the perfect escape from the avalanche of chocolate, Three Ireland’s EStars pop-up at Dundrum Town Centre, Unit 4 Level 2, is a late Easter treat and, with giveaways, cosplays and lots of surprises on the day, experience esports in your favourite Dublin retail hotspot.

Three Ireland’s EStars is competitive esports on a whole new level.  Eight weeks. Ten teams. A feud fought across the country.  A final decided on the stage of the 3Arena. To the victors, a €20,000 prize pot and a trip to Las Vegas. This is a first for Ireland.  This is epic. This is not a game. This is so much more.

Presented by radio stars, Connor Phillips and Holly Hamilton, Three Ireland’s EStars League at Dundrum provides a chance to see the world’s fastest growing spectator sport, in the comfort of the bustling centre. Expert gaming shoutcasters will explain and analyse the unfolding action, and soft drinks partner Lucozade, main sponsor Three, new retail partner Peak and food partner, Four Star Pizza, will be on site to add to the buzz and fuel the competition.

With Wednesday’s event also hosting the Bray Wanderers team’s home event, some of their footballing counterparts will also be present to cheer on the home team. Suffering a shock defeat to Bohemians in last week’s Sligo bout, the Bray Wanderers EStars remain focused on their ultimate destination, the finals at the 3 Arena. Bray captain Adam Mura said the Bray team were brushing off the loss and had their sights set for victory.

“Last week against Bohs was a disappointment, but we are confident facing Cork in the Dundrum leg,” he said. “We will smash them and dominate them and have no doubts that we’ll win.”

Mags Byrne of Three Ireland’s EStars said the unique one-day pop-up at Dundrum was set to be an unmissable event, with all the drama of the league itself, not to mention giveaways and surprises for spectators on the day.

“The concept of Three Ireland’s EStars has always been about bringing the thrilling world of esports on the road and to the wider public and holding our next event in Dundrum Town Centre captures that aim perfectly,” she said. “Our pop-up in Dundrum will offer the people of Dublin the opportunity to immerse themselves in a gaming extravaganza in a live setting.”

Karl Donnelly of Three Ireland added: “We are delighted to bring our sponsorship of the Three EStars league activity this week to Dundrum. This is the fourth round of an exciting new league which will culminate in a grand final at the 3Arena on May 13th. This partnership offers a really unique gaming experience for the first time in Ireland. At Three, we are committed to providing the latest technology innovations such as providing the first smartphone from gaming giant Razer handset, exclusively on the Three network, enhancing the lives of our customers. In addition, our All You Can Eat Data offering, enables our customers to truly make it count.”

Three Ireland EStars pop-up will be in Dundrum Town Centre, Sandyford Road, Dublin 16 this Wednesday from 9am, giveaways all day, with the action of the first games kicking off at 3pm sharp.