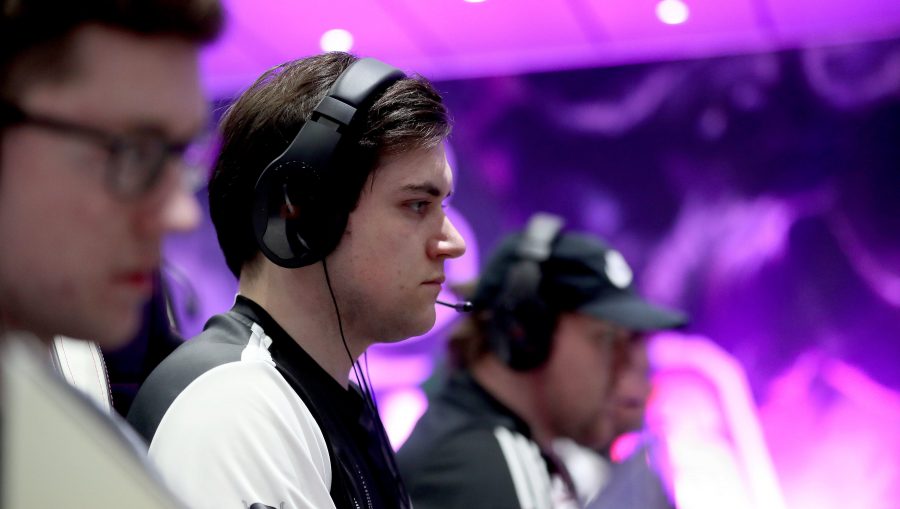 Week Seven, UL Sports Campus, Limerick. Three Ireland’s EStars enrolled at the top-class sports facilities at UL for the Limerick home encounter and adopted the themes of all classic sports yarns. There was triumph over adversity, there was the agony of defeat, the ecstasy of victory, there were motivational speeches and even cosplay, courtesy of home captain Katazen.

With just three league nights left, the stakes of Three Ireland EStars reached a new level of intensity at UL. With only two league nights remaining, the finish line is in sight, but it’s very much game on.

As our very own femme fatale Big Betty invited the players to take on the challenge, her lair parked aside the Sports Campus, the faced off for the latest hurdle of the biggest road trip Irish esports has ever seen. Once again, ten teams, representing nine League of Ireland football clubs and main sponsors Three and composed of the country’s finest gaming talent, braved Betty to face the next obstacle on the road to the 3Arena.  At stake, the right to contest the Grand Finals on May 13th, where the victors will walk away with €20,000 and a trip to Las Vegas.  Every win is crucial.  Every loss is devastating. This is not a game. This is so much more.

The previous week at Shamrock Rovers had been another thriller, with VIP and footballing stars mingling with the crowds at Tallaght Stadium to follow the latest twists of the Three Ireland’s EStars league. With teams reasserting their finals ambitions and shock victories, the league table received another frothy shakeup. Week seven promised another quintet of tantalising matches and, with the last few chances to secure a 3Arena spot on the line, the pressure to perform was evident. It’s sink or swim time for the contenders.

Between UL’s amazing Sports Campus and Betty herself, presenters Conor Phillips and Holly Hamilton grilled the contenders post and pre-match, about whose gameplay had been inspired and which teams’ displays had left a lot to be desired. The penultimate week.  The final trilogy of encounters. The action on stage didn’t disappoint.

Sligo have been surfing the crest of a wave in recent weeks, while Bohemians, having suffered three consecutive defeats, had been determined to stage a comeback. While the Sligo performance was not as dominant as they might have expected, they easily dispatched the Bohemians challenge. Sligo remain very much on course for final four hopes. Result: Sligo Rovers 1 Bohemians 0

Sitting pretty at the top of the table, Shamrock Rovers faced a Bray team snapping at their heels alongside three of the teams in second place. Having easily dispatched Limerick at their home game, Rovers knew Bray would pose a tougher challenge. Shamrock took an early lead and, while Bray rallied, the leaders closed up the game to cement their position at the top of the tree. Bray will not be able to put a foot wrong for the remainder of the competition to secure a finals’ slot. Result: Shamrock Rovers 1 Bray Wanderers 0.

Enjoying a tremendous run of success in the mid-section of the competition, St Pat’s have marked themselves out as true contenders for top four status and, with a Derry team floundering at the bottom of the table, St Pat’s were visibly confident that they could notch up another win. The Derry defence was not sufficient to withstand a dominant Pats, who retain momentum on their march to win a space in the finals. Result: St Pat’s 1 Derry 0

Dundalk and Cork both secured wins at Tallaght Stadium last week and were tied on the league table, each still with potential to make the playoffs. With Cork starting strong, the game looked like it would be a close one, but Dundalk took control to dominate the Cork attack and secure the win. Dundalk remain hopeful their momentum will take them all the way to the 3Arena, while Cork have a mountain to climb. Result: Dundalk 1 Cork 0.

Despite a dream opening of four consecutive wins, Team Three have suffered disappointment in their recent encounters. Limerick, with many changes to their roster across the course of the league, have had a less than glittering run. As strong favourites, Three making a decisive return to form with a smooth victory came as no surprise. Three remain in contention for the final four with the next two games vital for their chances. Result: Limerick 0 Three 1.

Mags Byrne of Three Ireland’s EStars said: “We’ve been treated to another brilliant league night at UL. With some massive acts confirmed this week for the 3Arena on May 13th, we are all so excited to be creating an event for our Finals to match the talent and excitement our teams have brought to this league so far.  Whichever teams make the playoffs, it’s going to be an unmissable event.”

Karl Donnelly of Three, Ireland added that the telecommunications company were delighted to pledge the sponsorship of the Three EStars league activity this week in UL.

“We were delighted to bring our sponsorship of the Three EStars league activity this week to University of Limerick,’ he said. “This partnership offers a really unique gaming experience for the first time in Ireland. At Three, we are committed to providing the latest technology innovations such as providing the first smartphone from gaming giant Razer handset, exclusively on the Three network, enhancing the lives of our customers. In addition, our All You Can Eat Data offering, enables our customers to truly make it count.”

To follow the progress of the teams in the next bout this coming Monday back at DCU and all the way to the 3Arena in May, check out ireland.estars.pro