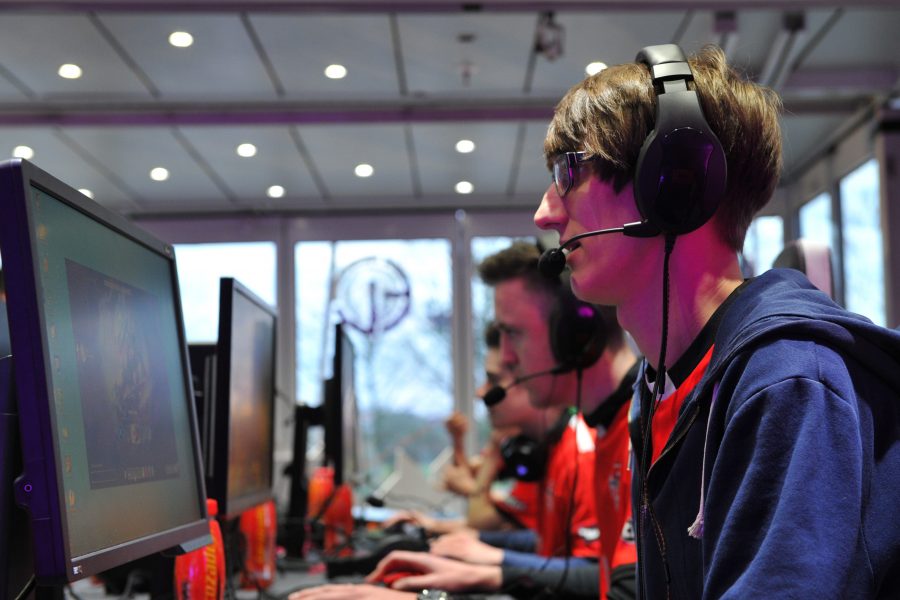 Week Five, Dublin City University, Dublin.  Three Ireland’s EStars invaded the Glasnevin campus to bring the competition back to class. There were hard lessons; there was severe flaunting of the corporal punishment protections; there was a strong representation of Tedblonde’s fangirls. Three Ireland’s EStars trip to DCU on Wednesday, April 11th, had all grades of excitement with the fifth league night.

With Her Highness Big Betty docked close to the Helix, the competitors stepped on to the latest leg in the biggest road trip Irish esports has ever seen. Once again, ten teams, representing nine League of Ireland football clubs and main sponsors Three and composed of the country’s finest gaming talent, took to the belly of Betty to face the next hurdle on the road to the 3Arena.  At stake, the right to contest the Grand Finals on May 13th, where the victors will walk away with €20,000 and a trip to Las Vegas.  Every win is crucial.  Every loss is devastating. This is not a game. This is so much more.

After the week four fixtures had been forced back online after a trip to Dundrum marred by keyboard malfunctions, one bout remained to be contested before we could move onto week five: Bohs v Pats. The week four Dublin grudge match did not disappoint, with St Pats ultimately emerging victorious.  There was no time to rest on bragging rights, week five awaited and the teams were focused on the latest hurdle on the road to the 3Arena. Presenter Conor Phillips grilled the contenders post and pre-match, about where it went so right in their clashes and where it went so wrong. With another batch of inspiring team displays, not to mention many moments of individual brilliance, week five at DCU was a lesson in strategy, confidence and nerves.

With both teams heading into the fifth week yet to chalk up a win, Limerick and Derry were both keen to stamp their presence on the leaderboard. With captain Katazen sporting a new look, the rejuvenated Limerick shook off their defeat to Sligo from their week four bout on Monday to take the win. Agony for Derry, to Limerick, the spoils. Limerick 1 Derry 0.

Two titans of Three EStars talent who have enjoyed mixed fortunes over the opening weeks, both Bray and Sligo stepped into their encounter with the confidence of dominant week four victories, but only one could win. Ultimately Sligo pipped Bray to secure the vital point for the next stage of the competition. Sligo 1 Bray 0.

With an unbroken winning streak, Three faced a Shamrocks side, who have secured consistent victories since their opening week loss to Cork. Both teams have an eye on a place at the finals, so the crowd knew this would be a thrilling encounter. Shamrock took the edge early, before soaring ahead to hand the sponsor team their first defeat. Shamrock Rovers 1 Team Three 0.

Buoyed by their victory over rivals Bohs earlier in the evening, St Pat’s faced a Cork side eager to secure a win after a week four defeat at the hands of Bray. The duo of bouts took nothing out of a dominant St Pat’s team as they made it two for two at DCU. Disappointment for Cork. St Pat’s 1 Cork 0.

The home team had fallen to rivals St Pats in the week four fixture earlier that evening and were focused upon taking a home win, but their opponents Dundalk had their eyes on a victory after a stinging defeat to Shamrocks in week four. Dundalk delivered a decisive display and their overdue victory and the home night became one to forget for Bohs. Dundalk 1 Bohemians 0.

Casters David Whyms and Nikita Buffee explained the unfolding action to our largest Twitch audience to date, while the crowd stepped out of the Nubar to enjoy support from soft drinks partner Lucozade, food sponsor Four Star Pizza, main sponsor Three and merchandise partner Peak.  The Spinnies, from media partner Spin1038, also took to the concourse to help the student population avail of the giveaways and the keep the spirits high on campus and in the Nubar.

Mags Byrne of Three Ireland’s EStars said: “Bringing Three Ireland EStars to DCU was a perfect match. The gaming community has been nurtured and developed in the colleges of Ireland and bringing the contest to DCU was a homecoming of sorts. With the competition still wide open, just who will take to the stage on May 13th remains to be seen. All we know for sure is that the Three Ireland’s EStars league will culminate in a brilliant final at the 3Arena. You won’t want to miss it.”

Karl Donnelly of Three, Ireland added that the telecommunications company were delighted to pledge the sponsorship of the Three EStars league activity this week in DCU.

“We are delighted to bring our sponsorship of the Three EStars league activity this week to DCU,’ he said. “This is the third round of an exciting new league which will culminate in a grand final at the 3Arena on May 13th. This partnership offers a really unique gaming experience for the first time in Ireland. At Three, we are committed to providing the latest technology innovations such as providing the first smartphone from gaming giant Razer handset, exclusively on the Three network, enhancing the lives of our customers. In addition, our All You Can Eat Data offering, enables our customers to truly make it count.”

To follow the progress of the teams in the next bout this coming Wednesday in Shamrock Rovers stadium in Tallaght and all the way to the 3Arena in May, check out ireland.estars.pro